Pappy Van Poodle: Nintendo characters have always been popular and it seems as if they do not always stay on the other side of the screen, but at times, we get so involved into this gaming world that we start feeling as if the characters have started residing just along with us. 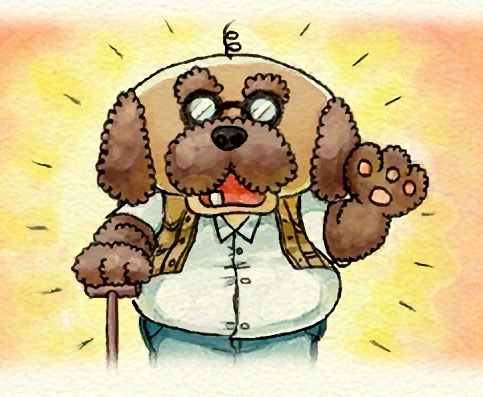 Amidst all these characters becoming so friendly to us, there are still a few whom we aren’t usually aware of! Read till the end of this draft to know more about that character.

The gaming world is so huge, and there are so many characters that it seems like no less than a family to us. Today, we are going to talk about one such Nintendo character, namely Pappy Van Poodle.

Pappy Van Poodle is a cartoon character from Rusty’s Real Deal Baseball on the Nintendo 3DS. Only he come out if the character does not negotiate with Rusty Slugger. He is Rusty’s old mentor who is helping the owner of shop while rough times.

Just recollect the memories of the free-to-play 3DS eShop title, Rusty’s Real Deal Baseball, and the year back in 2014 when it was first launched exclusively in North America.

It has been one of the earliest Nintendo games that was released prior to the mobile selection to avail paid contents that were eligible to download.

Remember playing that game? If you have had played the title, you will probably know how to haggle the shop keeper so as to lower the real world prices of the games on the eShop.

The in- game shop keeper, namely Rusty Slugger was a pushover and if you ever wanted to buy a game off him, you will be able to get it at a much cheaper price than 4 dollars even!

Recently, a YouTuber Nick Robinson had revisited this game and he tried convincing Rusty about buying these games from him at a full price, and he was successful in doing so!

Eventually, you may get to meet with the old overweight dog with a cane, Pappy Van Poodle. It seems as if Pappy used to be a neighbour, a businessman, and a mentor. Paying the full price basically unlocks 6 additional cut scenes that featured Pappy alongwith!

Until the early 2019, people particularly the ones who belonged to the West had absolutely no clue about the existence of such a character.

This was typically because of the fact that you would need to purchase an in-game character named Rusty in order to see him. Rusty was the name of the shop owner, in case you don’t remember!

Whatsoever, Nick Robinson, the YouTuber has uploaded a video in his channel, titled as quot; The Nintendo character with zero Google results.

This is when the craze of the fans about Pappy Van Poodle rose so high that it was found that the graph went as high as 15,100 Google search results from 0 in just a span of 5 months. Also, the video counted 3 million views which was terribly awesome!

You can watch the video which first publshed

When do you get to see Pappy Van Poodle?

The most interesting thing about the character, Pappy Van Poodle only if you pay the full price, but most of the players didn’t used to pay the full price for the game. They used to do so since there was a privilege for them to haggle.

Consequently, you are eligible to see the character only if you pay the full price of unhaggling games.

How is Pappy Van Poodle’s personality?

It is apparently visible in the scenes of the game that Pappy Van Poodle is a good friend of Rusty. He has been the mentor of the latter since 20 odd uears and is thus, known as the biggest fan of Rusty Slugger’s baseball team.

Rusty talks of him as an unofficial team mascot and he further described Rusty to be just like a son to him. Nevertheless, Pappy has always been supportive to Rusty and even offers him flowers to represent his kindness towards him.

Nick has clearly started in his video about Pappy saying that he has been such a selfless dog that he used to cross boundaries in order to help his friends. He was an excellent pup and that&#39;s how he could actually accumulate all the attention that he actually deserved.

How do you see Pappy Van Poodle in the Japanese version?

In the Japanese version of Rusty’s Real Deal Baseball, the title of the Pappy Van Poodle comes with Inuz Roop wherein Pappy seems to have a different set of outfit as well as backstory altogether.

There is no denial to the fact that Pappy Van Poodle was not that popular initially over the online platform, and it was first referenced over a Japanese blog site as the reference Pozukago back then in the year 2013. It happened only after 6 days of Rusty’s Real Deal Baseball being launched in Japan.

Pappy Van Poodle has been an amazing character from Nintendo. There are so many gaming characters that keep on evolving almost everyday. However, there are probably a couple of them who get the limelight that they actually deserve. The rest aren’t even known for their roles.

However, there are some YouTubers such as Nick Robinson who have had made things easier than ever for one and all. It is only because of them that these characters have achieved such fame and recognition among the players.

Since Pappy Van Poodle was rarely seen in the game, people weren’t aware of him at all. It is only until the release of this YouTube video that the character got noticed. If you are willing to see how this character functions, feel free to try out the game, and I am pretty sure that you aren’t going to regret haggling with Rusty and paying the full price for the game. This Nintendo character truly does worth it!