You must have heard that “For Programming, you must be a master in Programming. If you’re not, you’re just a script kiddie.” (FYI: Script Kiddie is a derogatory term for a person who uses pre-written scripts to hack for the purpose of just showing off to their friends or etcetera.) 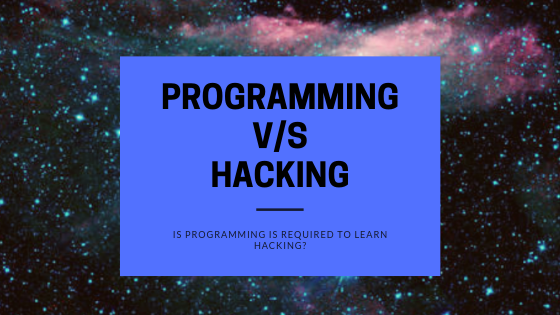 Well, this statement is
somewhat true; notice the ‘somewhat’ which I’ve written. It justifies that the statement isn’t completely true. It’s is partially true. You aren’t a script kiddie if you know what you’re doing.  If you launch an attack against, let’s say, a website’s server. If you know what you’re launching intimately, then you’re good to go and in order to gain that intimacy about the attacks, your fundamentals should be clear.

Now, what do I mean by ‘Fundamentals’? By ‘Fundamentals’, I mean the basics. Getting back to the scenario where you launched an attack against a website’s server, you must know the whole system like how does the data travels between the website and the server. Now, a programmer would know this, but what he won’t know is what type of encryption does the server use, what are the vulnerabilities in the service running and what ports are open in the target server and many more things ‘cause that comes in hacking. The plus point that a programmer has is that he knows what’s going on.

That’s important! So, coming back to the main topic, you can be a hacker if you’re a programmer but you don’t have to be a programmer to be a hacker. It’s completely your choice. It’s on you to determine whether hacking is good for you of programming is. So, my point being that if you know your way in hacking, you are good. But if you don’t know what you’re doing and just doing it by simply seeing someone else do it and just copy the commands and execute them, then there’s a term for you and you know it too, that is, SCRIPT KIDDIE………

Stay tuned for more informative articles. Drop a comment if you found this article informative and hit me up if you’re stuck somewhere in the path of Hacking/Cyber Security…